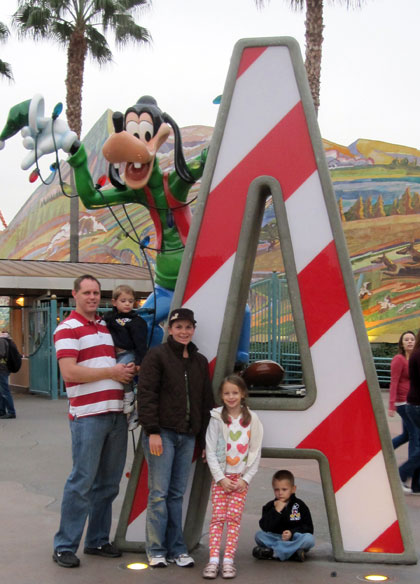 Our Family at Disneyland. Christmas 2009

What does "inzolo" mean anyway?

Inzolo is a Xhosa word that means peace or tranquility. The goal of this software is to help you budget your money and bring you peace and tranquility as it relates to your financial life.

Why Xhosa? Well, let me tell you about me, Dustin Davis, the creator of Inzolo... After graduating from high school in 1996, I served a two year mission in Cape Town, South Africa and surrounding areas. One area that left a particular impression on me was the township of Mdantsane. I have never seen so many people living in such small homes.

Many of these people literally had nothing. Often we would find young kids playing soccer in the dirt and weeds. They had no shoes and no soccer ball. They would play with a tennis ball, or piece of tin foil, or whatever they could find.

So, whether you have lots of money or little money, you can have peace and happiness. The problem is that in America we tend to have what Dave Ramsey would refer to as "stuff-itis" - we love stuff! Money is fun - if you have some. By using this budget system, you will learn to keep more of your money.

The Rest of the Story...

After returning home from South Africa, I'll be honest, I was a little disgusted with Americans and how obsessed we were with money and cars and stuff in general. It didn't take long for me to get over that and become an average American living the so-called "American Dream" via credit.

The thing is, I wasn't all that bad. When my wife and I got married, we started out with no debt. The first week we were married my 13 year-old car died. So we went out and got our first car payment - $300 per month on a 5 year loan for a used Ford Explorer.

After a year of marriage we bought our first house - a brand new house. The debt continued to accumulate from there. We traded in the Explorer for a Nissan Maxima and doubled our car debt. Then we did quite possibly the stupidest thing we've ever done. We thought it would be fun to go "test drive" some new SUVs. My wife was pregnant with our first child and she was planning on quitting her job after having the baby. We drove home in a brand new Mitsubishi Montero Sport - Limited Edition of course. We NEEDED the heated leather seats and fog lights. It was a no interest, no payments for a year deal.

We drove that car for 7 months - the whole time I had no idea how we were going to make those $700 per month payments when they came due. We were barely making it as it was - especially since we had a new child and my wife was no longer working. I was expecting a raise at work that just didn't come to fruition as I had hoped.

Honestly, I kept trying to do better with money. I read lots of books and got lots of advice. We even went to a financial counselor. In hindsight, I read the wrong books, and talked to the wrong people (seriously, who knew American Express had financial advisors - and why take advice from a credit card company? DUH!). We ended up selling our car and taking a huge loss and we sold our house and found something a little cheaper and a lot older.

It was about this time (January 2005 I believe) that I was riding in my friend's car and I noticed some CDs he had sitting on the floor with the title Financial Peace University by Dave Ramsey. My friend had been through this course with his wife and he liked to listen to the audio CDs in his car. Of course with all I had been through and my continued quest to learn the "secret" of money, I was curious. He let me borrow the CDs.

I ate them up. I listened to them over and over. Then I found the podcasts from his radio show. I would download them to CDs and listen each day as I would commute. The stuff Dave was teaching was basic stuff - stuff I had learned in church, but just didn't quite follow. He filled in the gaps, destroyed the "debt myths" I had been told by friends and family, and made it fun & motivational.

Another idea that resonated with me was when Dave taught about the envelope budget system. Again the idea was not new to me. While on my mission, during a meeting, the mission president's wife was counseling us on how to manage our money better as too many missionaries found themselves with "too much month left at the end of the money." She told us that they used to take their paycheck, cash it, and divide it into envelopes for different categories and bills. When they ran out, they couldn't spend any more in that category without using money allocated to other categories. I thought at the time it was a nice idea, but, as our expenses consisted of mainly food (groceries and eating out) I couldn't see the envelope system helping me out much in that situation.

Yet another budgeting application?

I followed Dave's budget plan as best as I could. I found paper just did not work for me. I really wanted a computer program. I used Excel for a few months. Excel was too much work. I looked at pretty much every budgeting application I could find. I found most applications were great at tracking expenses and showing me where I was spending my money - even creating fancy reports, but most lacked in budgeting features. Other applications did the budget thing well, but were bug-ridden, slow, or missing features that I wanted.

So I took my 8 years of programming experience and started writing a proof of concept to see if I could make a web browser do what I wanted an envelope budget application to do. Next thing I knew I had rekindled a programming passion that I had not felt for a while and things just started coming together. Thus, Inzolo was born!

I think I should just mention that we have turned things around. We are now debt free with two paid for cars and a nice home in an area we've always wanted to live. Our only debt is our house mortgage, which is manageable. We continue to live on a budget and are working for a completely debt free life!